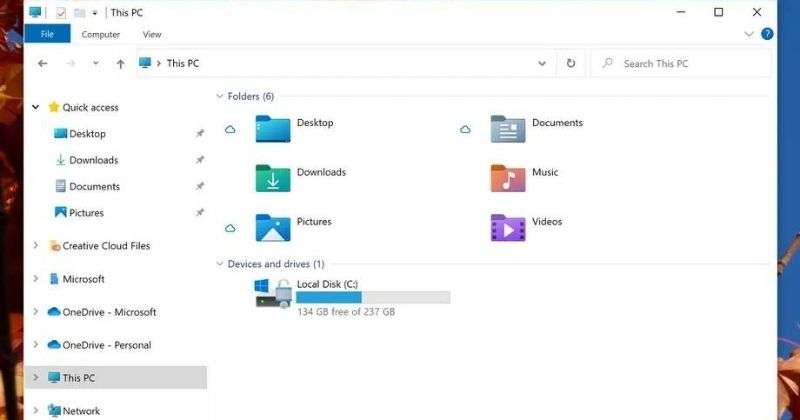 Microsoft has released an Insider Preview of Windows 10 Update that shows the redesigned folders. In the Insider Preview Build 21343, many changes are seen that will be coming to the latest Windows 10 update. One of the most prominent changes we have seen is the new icons in File Explorer.

Contents show
1 Microsoft Shows New Icons in File Explorer
1.1 Changes in Windows 10
1.2 Share this, your friend will love you for it:
1.3 Like this:
1.4 Related

Recently, the icons for Notepad were changed and now the changes are seen in the system icons like Recycle Bin, Documents Folder, and devices like disk drives. In 2019, Microsoft released new icons for its Office suite and it rolled out updated icons for Windows 10’s core apps.

In a blog post, Microsoft announced the changes coming to the latest Windows 10, and said,

“Several changes, such as the orientation of the folder icons and the default file type icons, have been made for greater consistency across Microsoft products that show files. Notably, the top-level user folders such as Desktop, Documents, Downloads, and Pictures have a new design that should make it a little easier to tell them apart at a glance.”

Even the Recycle Bin icon is updated. Earlier also the company tried to make a change to Recycle Bin but did not go well with the users. These icon changes are a part of Modernize windows. Earlier this month, Microsoft revealed the new system icons for Windows 10, and last year, the company updated some of the Windows 10 icons with colorful versions.

Apart from this, the company is also planning a “sweeping visual rejuvenation of Windows” codenamed “Sun Valley”. In the coming months, more details are expected to come out as a part of a dedicated news event.

The icon updates in File Explorer will come along with some tweaks. Microsoft is adding some padding between elements in Fire Explorer and to return to the Classic File Explorer mode, there will be a compact mode.