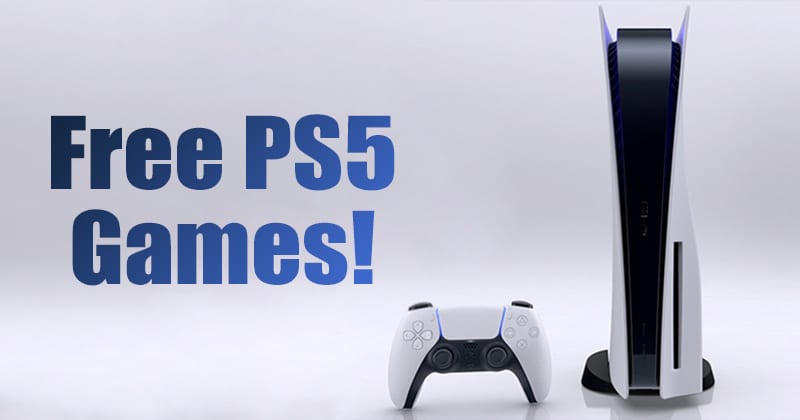 So, the PS5 is finally here, and it truly feels like a device came from the future. PS5 is supposed to shape the future of gaming consoles. Compared to the previous consoles, PS5 has powerful graphic tech and lightning-fast SSD, which loads games in just a few seconds.

If you have just purchased PS5, you might want to play some games on it. It doesn’t matter whether you are a fan of the racing or action genre; there’s something for everyone on the PS5. What’s more interesting is that the games keep coming in regular intervals, assuring that users never get bored with their consoles.

Since hundreds of PS5 games are available to play, picking up the best games could be time-consuming. If you give time and hard-earned money the top priority, you might like to play the free games first.

Also Read: PS5 Tips & Tricks: 10 Hidden Features You May Not Know About

List of 10 Best Free to Play Games for PS5

This article will list some of the best PS5 games that are free to play. However, please note that some of the games were initially meant for PS4, but they are fully compatible with the PS5. PS4 titles get even better on PS5. Few PS4 games with unlocked frame rates or dynamic resolution up to 4K might see higher fidelity.

If you are a big fan of PUBG, you might like Fortnite. Fortnite is an online multiplayer game where you and your friends team up to fight with other players on an island. The game’s ultimate goal is to kill others while surviving until the very one.

If you or your team becomes the last one standing, you win the game. Epic games develop Fortnite, and it’s one of the best battle royale games that you can play on your new PS5 console.

Well, Rocket League is one of the most unique and addictive car racing games you can play on your PS5. The game is a mixture of soccer and rocket-powered cars. You need to choose your vehicle, team up, and hit a ball into your opponent’s goal on this game. The gameplay might sound easy, but it becomes challenging as you progress. However, the good thing is that the more you play the game, the more addictive it becomes.

Apex Legends is another best battle royale game on the list that’s free to play on PS5. It’s an ultimate battle royale game where the characters get powerful abilities to destroy the opponents. The game basics remain the same – you team up with others and fight with the remaining ones until the end.

However, what makes the game unique is the gaming characters. Depending upon your gameplay, you can choose characters based on their abilities. You can use those abilities on the battlefield.

PlayStation Plus is a subscription service that grants PS4 and PS5 users access to online multiplayer games. As of now, the PS Plus collection lineup offers you access to 20 classic PS4 games like Battlefield 1, Batman: Arkham Knight, Fallout 4, God of War, and more. Since PS5 is backward compatible with PS4 games, you can play all games for free on your new PS5 console.

Well, Destiny 2 is free to play on PS4 and PS5, but it requires a PS Plus subscription. So, if you have already subscribed to PS Plus, you can play the game for free. The game allows you to dive into the world of Destiny 2 to explore the mysteries of the Solar system.

It’s a first-person shooter combat game where you play as a Guardian, defending humanity’s last city from infamous villains. The game is highly addictive, and it’s a genuinely excellent shooter game.

Call of Duty: Warzone is again a PS4 exclusive game, but you can play it for free on your PS5 console. It is a battle royale game where you combat against other online players. The good thing is that it lets you jump into a battleground with up to 150 players. The game has great maps, unique gaming modes, and guns.

What makes the game more unique and addictive is its twists like the Gulag system. If you are killed by an enemy, instead of kicking you out of the game, it takes you to a Gulag where you face another player in 1v1 combat. If you lose in the Gulag, you are out of the game.

The game is easy to play, but it’s pretty addictive. The good thing about the game is that almost every character in the game is free to play. You don’t need to subscribe to any additional service to access all the features.

CRSED is a PS5 exclusive free-to-play game available on the Playstation store. This is a battle royale multiplayer online game, but with lots of twists and turns. First, the game has seven different characters; they have their unique superpower.

All of the characters have different weaponry, different attack styles, and superpowers. Each battle royale session can contain up to 40 players. Like every other battle royale game, the last man standing gets the winner tag in CRSED.

If you are a huge fan of the first-person shooter game Overwatch, then you will love Paladins for sure. It’s a brilliant game but has lots of bugs. Also, the game development is comparatively slow than its counterparts. However, this game is free to play, so you may like it or not, you can give it a try.

The game has a total of 47 characters, and each of them was unique in its own way. Every character has a unique weapon, at least four abilities, and a special ability known as ‘Ultimate’. However, not every character was unlocked in the game. You need to use either real-money or in-game currency that you earn while playing to unlock a specific character.

Dauntless is a monster hunting game that’s very addictive and full of fun. The game doesn’t have any storyline; it’s just a classic monster hunting game, much like Monster Hunter. You need to track down massive monsters, kill them and loot the materials. You can use the looted materials to make new weapons to hunt an even powerful monster. The game is free to play, and it’s one of the best games that you can play on your new PS5.

So, these are the ten best free-to-play PS5 games in 2021. I hope this article helped you! Please share it with your friends also. If you know of any other such games, let us know in the comment box below.