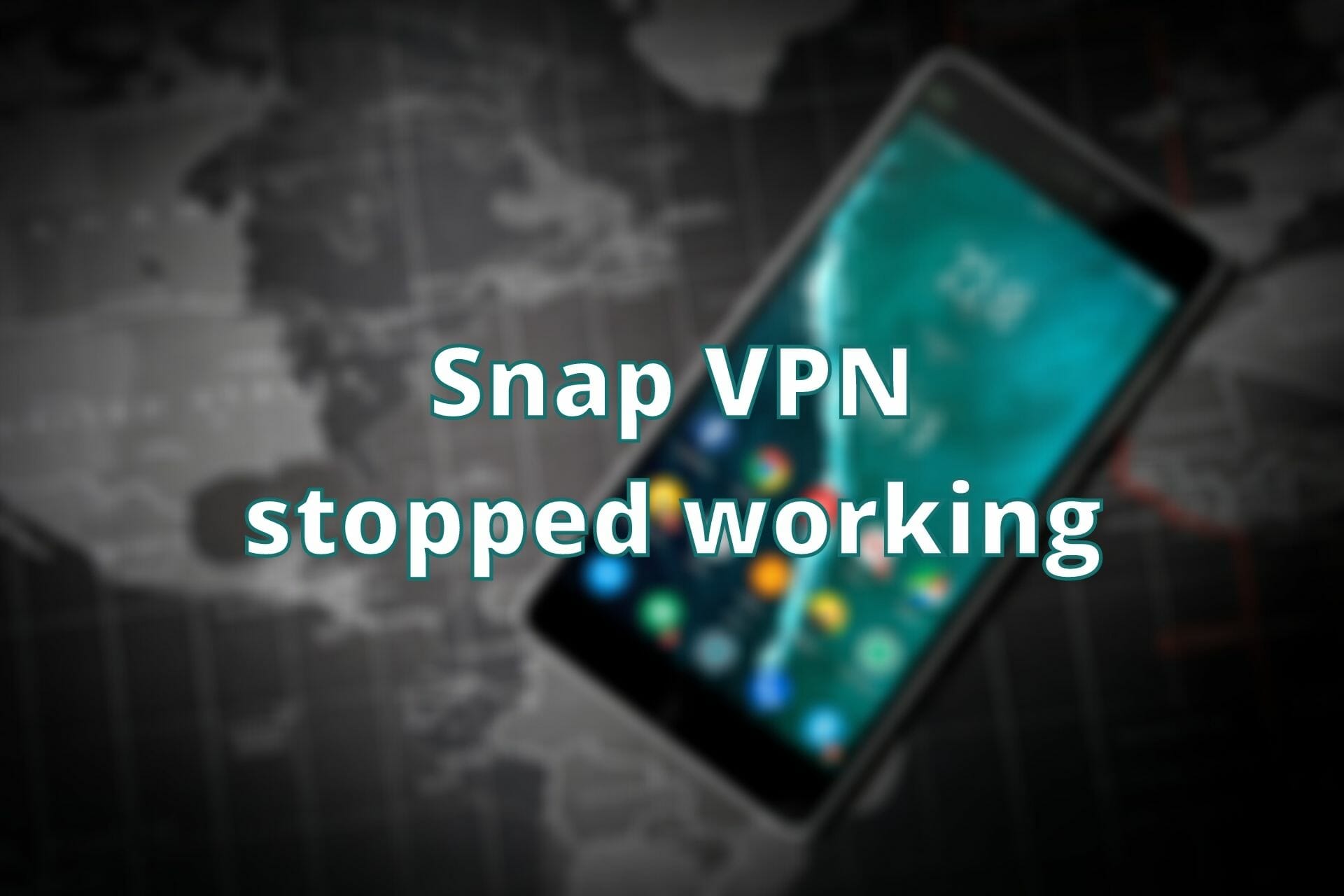 Snap VPN is a free VPN you can download and use on your Android phone.

It’s currently on Google’s Play Store and can be downloaded quite easily on your device.

You may expect that free VPNs are quite popular, since they offer you privacy protection for free, and you wouldn’t be far from the truth.

However, a part of Snap VPN’s popularity also stems from the fact that it stops working from time to time.

While some may shrug this off, a malfunctioning VPN can be catastrophic for your online privacy.

Check out our guide below and see what you can do if Snap VPN stops working.

How can I fix Snap VPN?

Restarting any malfunctioning device has been proven to fix some of the issues it may experience quite effectively.

You probably encountered tech support agents who asked you if you turned your device off and on again.

That’s precisely why they keep asking you that, because it works like a charm.

With that in mind, restart your Android phone and keep your fingers crossed.

When the device reboots, try running Snap VPN and check if it works.

You should always make sure you’re running the latest version of any app you’re using on your phone.

In this case, the spotlight shines bright on Snap VPN, so check if you have the latest version.

If you do, then you may want to try uninstalling the app and re-installing it on your phone.

Try to use official, trusted sources, such as Google’s Play Store, instead of shady APK websites to get Snap VPN.

Running a modified version of this VPN can put you against numerous security and privacy risks.

3. Switch to another server

Although Snap VPN shouldn’t have any servers that suddenly drop your connection, it sometimes happens.

That’s mostly because free VPN servers are usually overcrowded with users who enthuse over free stuff.

That being said, just try disconnecting from the server you’re currently on and pick a different one.

A common reason why Android VPNs such as Snap VPN stop working is due to lack of permissions.

If you’re trigger-happy about rejecting app permissions on your phone, you might notice your apps not working as they should, if at all.

Therefore, it goes without saying that you’ll need to grant Snap VPN with the permission it asks for if you want it to work properly.

The easiest way to do that is to uninstall/reinstall the app and hit that Allow button as soon as you see it.

One more thing: on Android phones, VPNs also need a special kind of permission to manage your connection.

Just make sure you grant Snap VPN the permission to manage your connection and check if it works after doing so.

We always say that a good VPN should be able to withstand various stressful situations.

For instance, if your Wi-Fi connection drops and your phone switches to mobile data, a VPN should not drop its connection and expose your identity.

However, sometimes Android VPNs can malfunction because of sudden changes in Wi-Fi (e.g. changing from a 2.4 Ghz network to a 5 GHz one).

To make sure that this is not the reason why Snap VPN bails on you, switch to mobile data and check if Snap VPN works.

6. Use a different VPN

First of all, Snap VPN is a free service, which are not exactly trustworthy, to begin with.

Second of all, if you tried everything in our guide and nothing seems to work, it’s probably time to move on.

Look, we know that you’ve probably picked Snap VPN because it’s free, but trust us, if you’re worried about your privacy, it’s just not worth it.

They either get to display ads on your device to generate revenue, or they collect and sell your data to whoever bids more for it.

Thus, it goes without saying that switching to a premium VPN will, without a doubt, be better for you in the long run.

Private Internet Access is a trustworthy VPN that will keep your identity private and boost your connection security in no time.

It supports up to 10 connections on the same account and has a great Android app that won’t let you down like Snap VPN.

Snap VPN suddenly stopped working on your device? Private Internet Access would never let you down.

All things considered, if Snap VPN stopped working on your device, there are a few methods you could try to fix it.

However, in the end you may want to reconsider and switch to a premium VPN that is less likely to malfunction.