10 Best Adobe After Effects Alternatives For Windows 10 in 2021 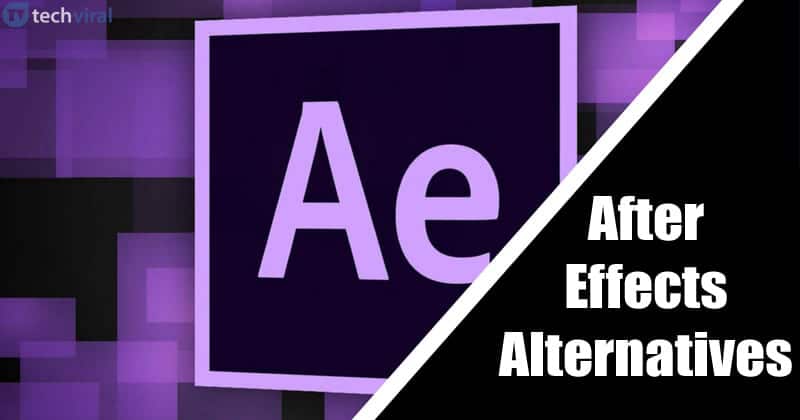 After effects, one can easily add visual effects in the videos such as snow, rain, cinematic movie titles, custom intros, transitions effects, filters, etc. It’s a visual effect software where you can create amazing videos using your creativity and imagination.

List of 10 Best Adobe After Effects Alternatives For Windows

Wax’s best thing is to export video files in WAV, MPEG, AVI, and Flash format. Apart from these, Wax can be used as a plug-in to other video editors. The Wax video editor also comes with lots of transitions, sound, and video effects that you can use on your recorded videos.

Well, Blender is a full-fledged 3D-creating suite. With Blender, you can easily create animation, motion tracking videos, 2D animations, and more. Although Blender might not be the best Adobe After effects alternative, it still offers lots of video editing features. The built-in video editor of Blender allows you to adjust layers, add transition effects, add filters, and more. However, Blender is not for regular users; it’s an advanced tool used mainly by designers and animators.

If you are looking for a professional video editing tool, then Lightworks might be the best choice for you. The great thing about Lightworks is that it can help you with a 4K/HD video project. After editing, you can directly share the video with various video-sharing platforms like YouTube, Vimeo, etc. The tool is available for Windows, Linux, and Mac, and it’s one of the best Adobe After effects alternatives you can use.

Well, Corel VideoStudio is an advanced video editing software on the list. However, Corel VideoStudio is relatively cheap compared to Adobe tools and has a very clear and visual interface that makes video editing an easy process. If you are a beginner at video editing, you might find the tool a little bit complicated. However, once you master the basics, there are some powerful features to discover, like motion tracking, 360-degree VR videos support, 3D text editing features, and hundreds of video effects.

It is more advanced than After effects when it comes to video editing. Eyeon Software Inc develops Eyeon Fusion, and it’s by far the best-advanced video editing tool that you can use today. The tool is mainly used to create stunning visual effects and digital composition. Some of the best films like Avatar, Terminator Salvation also relied upon Fusion to do post-production.

Well, DebugMode Wax is a free Adobe After Effects alternative that you can use on your Windows 10 computer. It’s an open-source tool used to create unique 3D text effects, composite, and adding special effects. Since it’s a free tool, the features are minimal compared to After effects.

Well, NUKE is another best After effects alternative that you can use right now. Just like Adobe After effects, NUKE can be used for compositing and creating special effects. It also includes lots of advanced tools like vector paint tools, color correction tools, rotoscope, and much more. However, NUKE is a premium tool, and it isn’t cheap, but you get the option to pay monthly or yearly.

These are some of the best Adobe After Effects Alternatives that you can use today. I hope this article helped you! Please share it with your friends also. If you know of any other such software, let us know in the comment box below.